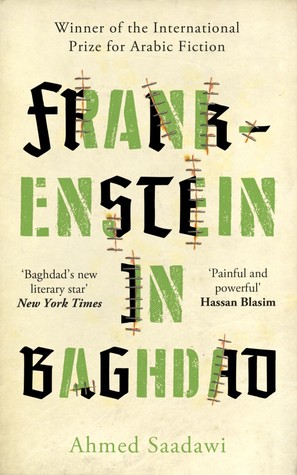 “From the rubble-strewn streets of U.S occupied Baghdad, Hadi a scavenger and an oddball fixture at the local cafe collects human body parts and stitches them together to create a corpse. His goal, he claims, is for the government to recognize the parts as people and to give them proper burial. But when the corpse goes missing, a wave of eerie murders sweeps the city, and reports stream in of horrendous-looking criminals who, though shot, cannot be killed. Hadi soon realizes he’s created a monster, one that needs human flesh to survive first from the guilty, and then from anyone in its path. An extraordinary achievement, at once horrific and blackly humorous, Frankenstein in Baghdad captures the surreal reality of contemporary Baghdad.”

I became immersed in Elishva’s story. The loss of her son to the Iran-Iraq war leads her to adopt a being with no human name. Instead, the being known as ‘Whatsitsname’ is inhabited by a wandering ghost stitched together from various parts of people who have already passed on. Loss, hope and longing for Elishva’s son is combined with the diasporic distance she feels from her daughters who now live in Melbourne, Australia. The city of Baghdad comes to life through Elishva’s eyes in the vivid descriptions of the different communities.

Though once the story unravels around Whatsitsname, Hadi (his creator) and Mahmoud (the journalist following them), the reader sees less of Elishva’s perspective as the monster’s introspective journey of justice, loss and vengeance takes over. Whatsitsname’s attempts to record his story through interviews conducted by the journalist – definitely parallel the original Frankenstein’s structure of soliloquies. Though the context is markedly different. Each character’s narrating perspective adds to a satirical reflection on the aftermath of this war. There is also a side plot in the journalist’s thread – where I’d add in a content warning for: The journalist does not recognise that his flirtatious embraces/kisses were unwanted by another writer, and despite stopping, he did not seem to fully understand why the other writer rejected his harassment.

The story seems to reflect on these moments where characters are absorbed only in they want to see, which leads to many different journeys. Frankenstein in Baghdad is both an introspective and satirical speculative fiction novel diving into the aftereffects of war upon a community.

One thought on “On loss and monsters: Frankenstein in Baghdad by Ahmed Saadawi”