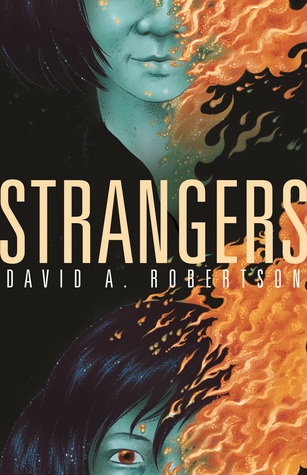 “When Cole Harper is compelled to return to Wounded Sky First Nation, he finds his community in chaos: a series of shocking murders, a mysterious illness ravaging the residents, and reemerging questions about Cole’s role in the tragedy that drove him away 10 years ago. With the aid of an unhelpful spirit, a disfigured ghost, and his two oldest friends, Cole tries to figure out his purpose, and unravel the mysteries he left behind a decade ago. Will he find the answers in time to save his community?

Strangers is the first novel in The Reckoner series by David Alexander Robertson, award–winning writer, and author of HighWater Press’ acclaimed children’s book When We Were Alone.”

It was great to read a YA urban fantasy/mystery with Cole, an Indigenous (Cree) protagonist who tries to understand his own anxieties both inside and outside of his small town. I remember seeing a social media wish for superhero stories centred around a protagonist with realistic anxiety, so I recommend this story. The gradual beginning reflects meeting Cole’s emotions as he is in a halfway space where he himself is still not sure about going back to his small town due to the trauma related to survivor’s guilt.

Cole’s grandmother with all her wit and compassionate wisdom for Cole made her my favourite character. There’s a strong thread of cultural community and connection for Cole that can be felt throughout the story even when Cole himself reflects on the distance created between him and his community due to the grief and loss of his loved ones. He also loses another friend in the present. (CW for a shooting related death and one small town homophobic bully).

The mystery elements gradually feed into the thriller aspects alongside the supernatural elements featuring an irreverent shapeshifting trickster by Cole’s side. I’m interested to see how Cole grows even more from the ending, so I look forward to the sequels.

*If you have an own voices review, and would like to link it, drop a line below.