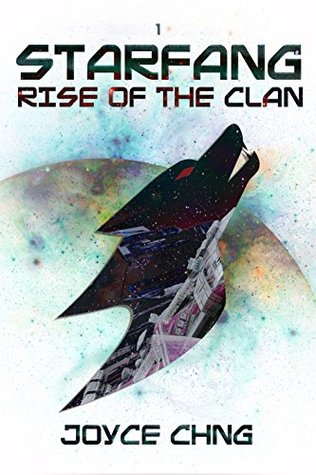 Is a clan captain going to sacrifice everything for her clan? Tasked to kill Yeung Leung by her parents, powerful rival clan leader of the Amber Eyes, Captain Francesca Min Yue sets out across the galaxy to hunt her prey, only to be thrown into a web of political intrigue spreading across the stars. Is Yeung Leung collaborating with the reptilian shishini and playing a bigger game with the galaxy as a price? Is Francesca’s clan at stake? Welcome to Starfang: Rise of the Clan, where merchants and starship captains are also wolves.

“Wolves should not be in space, but here we were, a clan of wolves and merchants. Instead of the preserved forests of New Earth and Noah’s Ark, we were in ships of steel and armor, reading data scans and commanding officers on the bridge. Wolves within the uniform of merchants and mercenaries, human seeming, claws and teeth sheathed.”

Welcome to Starfang, a space opera with werewolves, politics and intrigue

Starfang: Rise of the Clan by Joyce Chng

This novella packs a punch. I haven’t read a story with werewolves in ages but I really enjoyed how layered and visceral the clan dynamics were in this one. Starfang is a fast-paced space opera adventure with tightly woven werewolf clan tensions and customs. The story has a strong emphasis on family, independence, and survival. For a short read, it delivers strong catharsis and I can’t wait to read more about Francesca’s adventures in the future.

‘A Black Talon would not abandon a child, even if she was blood kin.’

Francesca is a queer heroine with a strong sense independence, loyalty and responsibility. Her decision to not leave a lost child on a neutral planet is a refreshing take on this trope. (The Skywalkers in the Star Wars universe could learn from her as neutral planets never stay completely safe harm.)

I also appreciate the realistic note that a universal language doesn’t automatically make communication flow between groups with different customs – another more believable take on a common SF trope. These small details throughout the novelette suggest a wider universe in between the action. I also appreciated the inclusion of specific wushu styles. In this story, Francesca practices Nangun or southern staff styles. I enjoyed how aspects of Chinese culture were interwoven with different werewolf clan dynamics in this universe.

There are genderfluid aliens in this story. CW Note: Francesca refers to the alien S’sahrak as ‘it’ in her internal dialogue. S’sahrak later corrects her on the pronouns and respectful terms to use in Shishini culture.

*I also read Starfang for #AsianLitBingo in May.

For more book reviews, support with coffee at Ko-Fi.

5 thoughts on “Starfang: Rise of the Clan by Joyce Chng”