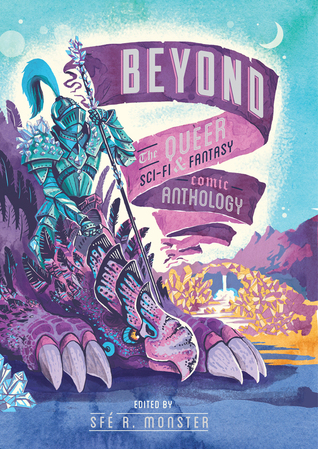 Featuring 18 stories by 26 contributors, Beyond is a 250+ page, black and white, queer comic anthology, full of swashbuckling space pirates, dragon slayers, death-defying astronauts, and monster royalty. Each story celebrates and showcases unquestionably queer characters as they explore the galaxy, mix magic, have renegade adventures, and save the day!

The Beyond Anthology was born from a desire to see stories inspired by people like us (queer people with diverse genders and sexualities) slaying dragons, piloting spaceships, getting into trouble, and saving the day—without having to read for their queerness from between the lines. We wanted to see beautiful, heartwarming, and adventurous stories that reflect and celebrate the many facets of gender and sexuality, without having to worry that their queerness would cast them as a villain, a pariah, or turn them into a cautionary tale.

This was incredibly heartwarming and fun to read. I’m still relatively new to comics and graphic novels but there’s something relatable about how a character’s thoughts, words and silences co-exist with images to show the diverse world as it is. I love how this anthology fulfills its promise in that shows a spectrum of individuals motivated by love as they tackle all sorts of space adventures, planetary survival stories, technological confrontations and/or magical quandaries.

Each story shone with its own distinctive style. There are many different stories centred around same-sex couples, gender-fluid couples and their ambitions in space. A sense of wonder, technological progress and a grounded closeness between the romantic female couples and astronauts is conveyed in ‘Luminosity’ and ‘Duty and Honor.’ There is a lot of joy in the stories across the anthology but occasionally, loss is present too. These latter stories do not leave the reader without comfort, hope or resonance either.

The focus on family in some stories was also sweet. The David Bowie jokes that the dads throw around while they rescue their daughter from goblins in ‘Of families & Other Magical Objects’ were gold. I also appreciated the adoptive fathers in the wintry world of ‘The Grave of Wolves.’ The parental wisdom about the war they survived in their world is timely as ever: ‘That men cannot be monsters. That is the lie righteous men tell themselves.’

Passing on critical thought around leadership is pivotal for the next generation.

Love, acceptance and protection is present throughout all the stories that feature families. The single-parent that raises her trans son as he readies himself against a dragon is wonderful in ‘The Dragon Slayer’s son.’ It’s a great coming of age story that subverts a few genre tropes. The close-knit unit around the trans female android in ‘Optimal’ was heartwarming too.

A few more stories caught my eye as per the nature of anthologies but I’ll leave them to new readers. I recommend this collection to anyone who reads SFF comics. I have a small list of webcomics I follow at the moment, so I will be checking out the individual creator’s links later on.

*Thanks to Naz for putting this anthology on my TBR all those months ago. Also, thankful to the publishers for recently putting the e-book on sale and donating all proceeds to the Trans lifeline.

12 thoughts on “Beyond: the Queer Sci-Fi & Fantasy Comic Anthology”