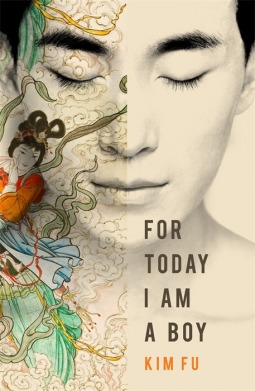 Finding one’s place in the world can be hard, but sometimes even more elusive still is finding where you fit in your family.

Peter Huang and his sisters—elegant Adele, shrewd Helen, and Bonnie the bon vivant—grow up in a house of many secrets, then escape the confines of small-town Ontario and spread from Montreal to California to Berlin. Peter’s own journey is obstructed by playground bullies, masochistic lovers, Christian ex-gays, and the ever-present shadow of his Chinese father.

At birth, Peter had been given the Chinese name juan chaun, powerful king. The exalted only son in the middle of three daughters, Peter was the one who would finally embody his immigrant father’s ideal of power and masculinity. But Peter has different dreams: he is certain he is a girl.

Sensitive, witty, and stunningly assured, Kim Fu’s debut novel lays bare the costs of forsaking one’s own path in deference to one laid out by others.

For Today I Am a Boy by Kim Fu

It’s always best to seek out multiple own voices perspectives on stories with trans protagonists. See articles such as Rise of the Gender Novel, which explores the potentially problematic/triggering elements for a trans reader. Also this review, which shares a different trans perspective on the book.

Audrey is given the name Peter by her parents but expresses her desire to continue life as Audrey by the end of the novel.

The writing of this book is laden with visceral moments. Audrey’s memories pulls the reader into her experiences as a young trans girl who finds it difficult to fit into the cultural and gender expectations that permeate her life. I really appreciated the complexity of the family dynamics and the exploration of how the pressure to assimilate affects an immigrant family on so many levels.

The book also covers Audrey’s early adult life and the gradual steps she takes to assert her identity. Though I found it hard to read some of her later experiences as an adult with both emotionally and physically abusive lovers (trigger warning for rape during these scenes). Those extreme experiences of alienation are balanced with slight moments of hope such as acceptance from unlikely friends and a dream the protagonist holds of being herself with her sisters.

Though I wish there were more of these moments because as important as it is to delve into a sense of alienation that surrounds a person in a narrow-minded society, I also want to read more Trans stories wherein hope and love are shown in equal balance with the pain an individual experiences in life.

Some stories skew more towards a tragic bend in the few LGTBQ+ books I’ve read so far, so I’m open to any book recommendations wherein there is a balance to those elements. There is quiet pull and power to this book, which I appreciate so much but it’s also worth keeping in mind that this shows only one experience in a range of dynamic stories to find and read.

*It’s also been brought to my attention that even though research has gone into this story, it is worth reading more #OwnVoices trans stories, which I will endeavour to do.

*See Vee’s #OwnVoices thoughts + articles for an important perspective on storytelling tropes around the depiction of physical/sexual assault in trans stories.