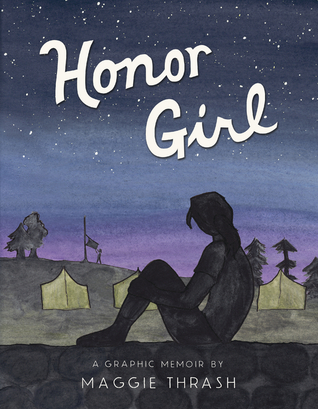 All-girl camp. First love. First heartbreak. At once romantic and devastating, brutally honest and full of humor, this graphic-novel memoir is a debut of the rarest sort.

Maggie Thrash has spent basically every summer of her fifteen-year-old life at the one-hundred-year-old Camp Bellflower for Girls, set deep in the heart of Appalachia. She’s from Atlanta, she’s never kissed a guy, she’s into Backstreet Boys in a really deep way, and her long summer days are full of a pleasant, peaceful nothing . . . until one confounding moment. A split-second of innocent physical contact pulls Maggie into a gut-twisting love for an older, wiser, and most surprising of all (at least to Maggie), female counselor named Erin. But Camp Bellflower is an impossible place for a girl to fall in love with another girl, and Maggie’s savant-like proficiency at the camp’s rifle range is the only thing keeping her heart from exploding. When it seems as if Erin maybe feels the same way about Maggie, it’s too much for both Maggie and Camp Bellflower to handle, let alone to understand.

I enjoyed Maggie’s wry humour and straightforward personality as I dove into her coming of age story that takes places in this strange camp. Her first crush on Erin is so sweet and the build up in the scenes between them is palpable but also realistic. There is a sense of longing that threads through the story. Though Erin is a bit of a distant character, which makes their relationship a strained one.

After Maggie comes out, I really liked how she had a supportive friend in Bethany. I loved the scenes when they teased each other. The inside jokes around the Backstreet Boys also made me laugh while the songs got stuck in my head. On the other hand, the later scenes with the camp overseer, other ‘friends’ and trusted adults – really highlights how dismissive homophobic attitudes can hurt people. I liked that Maggie always pursued what she wanted despite how vulnerable this close-minded community made her feel. The overall cast of characters is not very diverse but not surprising, given that this is a memory of an insular close-minded camp in the South.

The realistic ending to Maggie’s first love reminded me of Skim by Mariko Tamaki – another great contemporary YA graphic novel with a lesbian protagonist. The simple illustrations and the soft pastel tones of the graphics support the nostalgic and tension filled aspects of this coming of age story. Thanks again to Chiara for putting Honor Girl on my TBR.