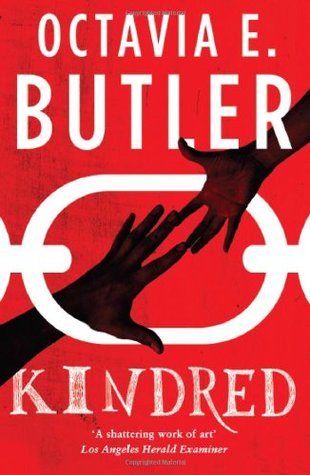 On her 26th birthday, Dana and her husband are moving into their apartment when she starts to feel dizzy. She falls to her knees, nauseous. Then the world falls away.

She finds herself at the edge of a green wood by a vast river. A child is screaming. Wading into the water, she pulls him to safety, only to find herself face to face with a very old looking rifle, in the hands of the boy’s father. She’s terrified. The next thing she knows she’s back in her apartment, soaking wet. It’s the most terrifying experience of her life … until it happens again.

The longer Dana spends in 19th century Maryland – a very dangerous place for a black woman – the more aware she is that her life might be over before it’s even begun.

I requested more books while my sister was travelling in the US. After recovering from jet-lag, she dropped Kindred on my reading pile. We’ve now reached an unspoken agreement that our joint bookshelf will have more Octavia Butler. I’m in the middle of a readathon but I haven’t moved onto another book after finishing this one. Classic book hangover behaviour.

Historical fiction with a time travel bent is a genre I love. Dana is swept in and out of 19th Century Maryland through a speculative bond between herself and a person from this era. Time travel is based on this link rather than through scientific means. This volatile relationship is the driving force of the novel.

Dana confronts the reality of living in the 19th Century with all its oppressive social mores but she’s also thrown back into trying to adjust to the present social norms of her 1970s life at unpredictable moments. The tense flipping between these opposite states of being is not explored much in the other time travel stories I have read. I thought it was fascinating to read about these world-flipping experiences here.

All of the characters in Kindred are so well rounded and flawed. Following how they change (and/or fail to change) is compelling. Dana grew up reading about the history of slavery but she comes to a greater understanding of systemic racism through her 19th century life.

What affects how we perceive each other’s humanity is a necessary part of all stories. It’s gut-wrenching to read about certain characters who fail to recognise Dana’s humanity as equal to their own. I recommend Kindred to anyone looking for a thrilling but thoughtful character-driven time-travel novel.

*Since slavery is a huge part of this story, trigger warnings for violence, rape and attempted suicide within.