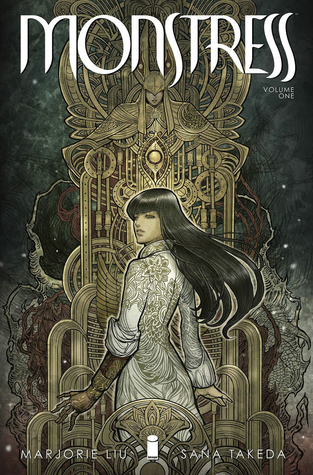 Set in an alternate matriarchal 1900’s Asia, in a richly imagined world of art deco-inflected steampunk, MONSTRESS tells the story of a teenage girl who is struggling to survive the trauma of war, and who shares a mysterious psychic link with a monster of tremendous power, a connection that will transform them both. Entertainment Weekly praised MONSTRESS as “one of Image Comics’ most imaginative and daring new series” and dubbed it the “Best New Original Series” in their year-end “Best Comics of 2015” list.

I recommend Monstress to anyone who is looking for a powerful read about a heroine navigating the aftermath of war. Maika follows her own questions about survival, power and hope into volatile places. In the beginning, she is presented as a slave but there is a sense of strength and guardedness in her gaze.

Both the reader and the Cumaea witches learn not to underestimate Maika as she attempts to protect other captured supernatural archanics like herself by taking apart their abusive jailers. The action scenes are tense and emotionally charged. The violence is brutal but it isn’t gratuitous. With each issue, there are a few hints given to shed light upon the mystery around the Kaiju-like monsters, Maika’s family and the war.

One of the major threads of the story follows how Maika deals with alienation, the monster inside of herself and the monstrous things people did in war. As Maika’s confidant, Tuya understands that this is a journey Maika needs to take on her own. Their supportive friendship can be felt throughout the story.

Visually, Sana Takeda’s art is stunning. The art-deco tones are lush and only serve to build the world and the immersive atmosphere of the story. This multicultural Asian universe realistically reflects how people across Asia possess a variety of skin tones and features. There is a unique blend of Egyptian, Mongolian, Japanese, European and other influences on both people and their world. (Though I do wish there was bit more of a South-East Asian influence too).

In the first issue, I was worried that too many of the major characters appeared to fit an idealized Eurasian form of beauty but as the story progressed, there is an exploration of how monstrousness affects beauty within. I didn’t notice there weren’t any male characters until the fifth issue where a few major ones appear for the first time. This is a credit to how the matriarchal society is wonderfully and subtly built into this universe. Romance is not a part of Maika’s story but there are both heterosexual and same-sex relationships in this world.

Speaking of world building and mythology, I loved the small kitsune who brings some lighter moments into the story. There is serious political and violent tension between humans, cumea and arcanics, so the occasional lighter tone is appreciated. (The cumea are the order of witches who devour the archanics for power. Archanics like Maika can pass as human but often have supernatural traits). Though the reader can trust Professor Tam Tam to brew horrifying chocolate mouse fondue while she explains mythology and history at the end of issue to help readers grasp this complex universe.

I’ve only been immersed in a few fantasy stories that deal with what happens after wars dislocate people from both their homeland and loved ones: Full Metal Alchemist, The Shadowed Sun by NK Jemisin and The Lumatere Chronicles by Melina Marchetta to name a few. Monstress with all its grittiness, despair and subtle hope definitely deserves to be on that list. I also loved the fan letters and the editorial answers in the individual issues of the review copy. Though I also bought a volume to put on my shelf.