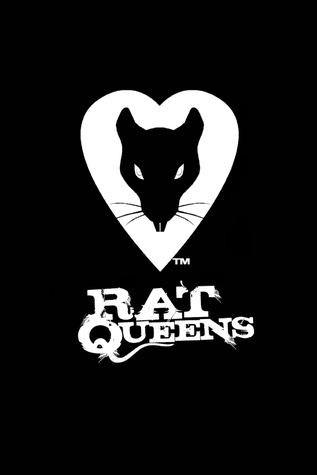 Who are the Rat Queens? A pack of booze-guzzling, death-dealing battle maidens-for-hire, and they’re in the business of killing all god’s creatures for profit. It’s also a darkly comedic sass-and-sorcery series starring Hannah the Rockabilly Elven Mage, Violet the Hipster Dwarven Fighter, Dee the Atheist Human Cleric and Betty the Hippy Smidgen Thief. This modern spin on an old school genre is a violent monster-killing epic that is like Buffy meets Tank Girl in a Lord of the Rings world on crack!

This deluxe hardcover edition combines the first two volumes of the New York Times bestselling series. It includes the never-before reprinted RAT QUEENS SPECIAL: BRAGA #1, and plenty of extras all in an over-sized hardcover with a SILVER-FOIL stamped cover!

I stumbled across the second issue of this comic a few months ago and I was quickly sucked into this world. Even though I’d only met these characters halfway in their journey,  I was completely charmed by their collective badarsery and ability to admire an enemy’s witty comeback in the middle of a battle. While I was reading this edition, I found myself pulled in again by the eclectic rat queens crew’s drama in and out of missions.

I was happy to jump into the deluxe edition of the first volume which compiles the first two issues together. The change in art styles is noticeable but I quickly adjusted to it. I loved being able to follow this story again. For thoughts on individual characters, see my previous non-spoilery review of issue 2, which is also included in this edition.