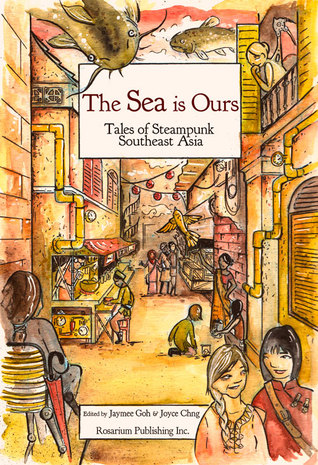 Steampunk takes on Southeast Asia in this anthology

The stories in this collection merge technological wonder with the everyday. Children upgrade their fighting spiders with armor, and toymakers create punchcard-driven marionettes. Large fish lumber across the skies, while boat people find a new home on the edge of a different dimension. Technology and tradition meld as the people adapt to the changing forces of their world. The Sea Is Ours is an exciting new anthology that features stories infused with the spirits of Southeast Asia’s diverse peoples, legends, and geography.

The Sea Is Ours: Tales from Steampunk Southeast Asia

It was refreshing and eye-opening to read steampunk stories from a non-eurocentric perspective. The Sea is Ours was everything I could have asked for and more. It holds a wondrous handful of speculative stories.

This collection opens with Timothy Dimacali’s ‘On The Consequence of Sound,’ which is prefaced with a legend around sky whales floating over Mount Taal in Philippines. It creates a starting point for a bittersweet coming of age tale, which also brings together two wishes from my childhood: 1) A wish to fly combined with my love for mythic creatures. 2) A wish to find speculative stories with people like me in them.

I grew up in Australia, so I didn’t find any Filipino characters in the stories I read until I was 16. I remember when my English teacher shared a short story from White Turtle because it widened my imagination and reading world to include people like me in it. The Sea is Ours evoked that same feeling of recognition. We all treasure the books that become gifts and mirrors in our lives.

Back to this anthology: I’ve grouped the following short stories under very loose shared elements for the review to organise my haphazard thoughts –

I loved the aswang (a Filipino vampiric creature) who takes parts in an anti-imperialist stand in ‘The Last Aswang’ by Alessa Hinlo. I appreciated the speculative take on sustainable domes in Saigon and the wondrous appearance of a certain creature in ‘Life Under Glass’ by Nghi Vo. I also liked the visceral repairs to the fighting spiders in the Singaporean markets of ‘Spider Here’ by Robert Liow.

I was hooked into the working tensions between the New Manila princess and the independent airship crew in ‘Chasing Volcanoes’ by Marilag Angway. Ivanna Mendels’ ‘Petrified’ builds a layered story about re-formed pirates, mythical creatures and runaway inventors around the Indonesian coast. There is also a seductive blending of music, rebellion and augmented bodies in ‘The Unmaking of The Cuadro Amoroso’ by Kate Osias.

In ‘The Chamber of Souls’ by ZM Quynh, I was pulled into a cloud-ridden speculative world, which touches upon assimilation from the perspective of a Vietnamese refugee. Olivia Ho’s ‘Working Woman’ follows an array of estranged characters (who have been forced to migrate) with keen senses and a certain steampunk-invention related flair in Singapore. I really loved getting to know the characters in this action packed story.

Colonial movements, mythic creatures and steampunk inventions contribute to familial tensions in ‘Between Severed Souls’ by Paolo Chikiamco. There is also a playful take on a disagreement between two brothers who took different paths inside and outside of Thailand in ‘Ordained’ by L.L Hill. I enjoyed the sharing of family secrets and the clever paths taken in the final story of this collection: ‘The Insects and Women Sing Together’ by Pear Nuallak.

I wanted some stories to be longer but I hope there are a few steampunk novels brewing because I loved the depth of each speculative world. To echo the introduction of the anthology, there is no limit to the diversity of stories rooted in the Southeast Asian region. This collection only shows a sample of what is out there. I can’t wait to read more.

14 thoughts on “The Sea Is Ours: Tales from Steampunk Southeast Asia”