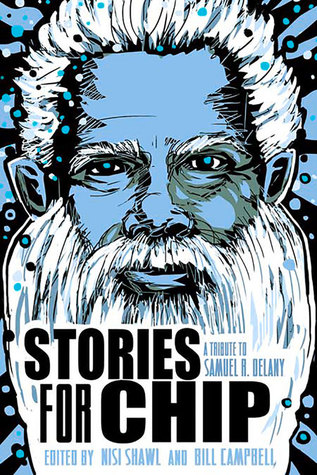 Delany was instrumental in supporting the decolonization of my imagination, truly the most dangerous and subversive decolonization process, for once it has started, there are no limits on what can been visioned. This type of science fiction/speculative fiction,“visionary fiction”- as opposed to mainstream SF that reinforces dominant paradigms of power and oppression – is the foundation of my work now, thanks to visionaries like Delany, Butler, Due, and many others.

– ‘Samuel Delany and Visionary Fiction,’ by Walidah Imarisha, from Stories for Chip: A Tribute to Samuel R. Delany

Stories for Chip brings together outstanding authors inspired by a brilliant writer and critic, Science Fiction Writers of America Grandmaster Samuel R. “Chip” Delany. Award-winning SF luminaries such as Michael Swanwick, Nalo Hopkinson, and Eileen Gunn contribute original fiction and creative nonfiction. From surrealistic visions of bucolic road trips to erotic transgressions to mind-expanding analyses of Delany’s influence on the genre—as an out gay man, an African American, and possessor of a startlingly acute intellect—this book conveys the scope of the subject’s sometimes troubling, always rewarding genius. Editors Nisi Shawl and Bill Campbell have given Delany and the world at large, a gorgeous, haunting, illuminating, and deeply satisfying gift of a book.

I must admit that I have only read two short stories by Samuel R. Delany. (For the curious: Aye, and Gomorrah, and Time Considered as a Helix of Semi-Precious Stones. Both can be found in Aye, and Gomorrah: And Other Stories.) If you’re unfamiliar with Samuel R. Delany, I recommend this great article on his work – Samuel Delany and the Past and Future of Science Fiction.

Stories for Chip: A Tribute to Samuel R. Delany is comprised of original speculative stories and creative essays by writers inspired by his work. I liked that each speculative story embraced diverse possibilities. I also found each story to be accessible in a stand-alone fashion for readers who are unfamiliar with Delany’s work. Although it was sometimes, jarring to jump from one voice to another as there are no contextual notes around the stories. A few stories that I enjoyed below:

This haunting adult story focuses on sharing a bed with a monstrous creature. The developing physical relationship between the two is an explicit part of this compelling journey.

I love stories about creatures born between the land and the sea. I really liked the inner tension and the voice of this piece:

You came from this here water, but you are also a part of this land…So find what you love most from both of those things that make you, and then you go out into this world and make yourself.

Reality, ghosts and nightmarish sharks mix together in this story. Creepy but I was hooked into the surreal overlap of these elements.

I liked how this story jumps from one world to another with a diverse cast of characters.

I enjoyed the intertwining of a cyberpunk world of lost information and the Hindu stories about creation, maintenance and destruction.

– Delany Encounters, Or, Another Reason I Study Race and Racism in Science Fiction by Isiah Lavender III –

This essay led me to Delany’s thoughts in ‘Racism and Science Fiction‘ which can be read here. Lavender’s essay mainly focuses on Delany’s contribution to Afro-futurism and diverse ways of re-imagining the future to counter-act dominant oppressive ways of envisioning the future.

As a Black radical nerd in high school, I felt that Delany’s work connected with me via race; I had found only a handful of Black science fiction writers at that time, and I treasured each one as a reinforcement of my very right to exist in a world that often made me feel like I shouldn’t. A reinforcement of my right that Brooks spoke of, to re-imagine this world, and to imagine many others.

– Real Mothers, a Faggot Uncle, and the Name of the Father: Samuel R. Delany’s Feminist Revisions of the Story of SF by Timmel Duchamp –

This essay discusses the historic erasure of the Feminist contribution to science fiction (in particular, cyberpunk) through the pervasive focus upon a patriarchal lineage of the stories. Duchamp highlights this argument by drawing upon Samuel R. Delany’s thoughts in an interview to dispel that patriarchal myth.

– On My First Reading of The Einstein Intersection by Michael Swanwick –

I really liked this focus upon Delany’s work in terms of writing. The way Delany uses language to challenge storytelling norms was interesting to read. After reading about how inspired so many writers were by his work, I’ve added a few more Delany’s novels and anthologies to read in the future.

6 thoughts on “Stories for Chip: A Tribute to Samuel R. Delany”