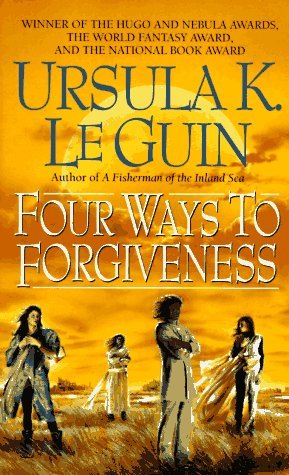 You can’t change anything from the outside in. Standing apart, looking down, taking the overview, you see pattern. What’s wrong, what’s missing. You want to fix it. But you can’t patch it. You have to be in it, weaving it. You have to be part of the weaving.

Ursula K. Le Guin revisits her popular Hainish universe with four interconnected stories that together weave a tapestry of revolution and political turmoil. Le Guin tells the tale of two worlds where decades of slavery and class distinction are about to come to an end. She begins at the end with the story of a woman who survived the perilous times and now must face what comes after. Then in turn come tales of a naive envoy, an aloof observer forced to choose sides, and a young slave who wins freedom, only to confront the bonds of her own mind.

I am in awe of how Ursula K. le Guin captures the complexity of power based relations between people. Whether it’s being stranded in the aftermath of a revolution or dealing with the imposition of ideas around freedom (or a sense of dislocation) – these 4 novellas tackle questions around power structures, choice and finding one’s own feet in the aftermath.

I loved diving into each character’s shifting inner world of thoughts. There is a self-aware approach to each protagonist’s reflective state of being; as they move between various speculative societies with subverted norms. The final story touches upon a speculative society where darker skin carries the ideal form of beauty and privilege. In this society, there is also a role reversal regarding slavery. I will read more on this subject but I think this flip adds another layer to this particular world in the Hainish universe.

Each story dives into different experiences of oppression and its after-effects in a gritty, raw and realistic way. I enjoyed the personal growth arcs of the characters which made the discovery of love worthwhile. Friendships and relationships moved towards a mutual sense of understanding and acceptance. I loved that sense of realism and the exploration of human vulnerabilities and strengths in this layered speculative universe.

One thought on “Four Ways to Forgiveness by Ursula K. Le Guin”