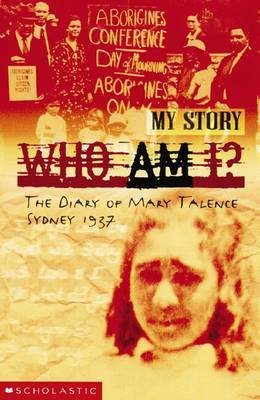 Set in Sydney, Australia, 1937. This is the fictional diary of a young aboriginal girl, a member of the Stolen Generation.

Mary is given a diary by the Sister in charge of Bomaderry Aboriginal Children’s Home and through its pages she describes her life – from her arrival there, aged five, through her struggle to understand why she was taken from her real mother, to her adoption at ten years of age by a white Catholic family in St.Ives.

Mary Talence, birth name Amy Charles, is increasingly confused – and then ashamed – as she is taught that white skinned is good, black skinned is bad. She longs to understand why this is so but finds that logical questions – almost any questions – provoke anger and accusations of ingratitude from her white family. Her music – her beautiful voice and her ability to make up songs – is her greatest source of comfort.

Who Am I? The Diary of Mary Talence by Anita Heiss

(Dr Anita Heiss is a member of the Wiradjuri nation of central New South Wales.)

To celebrate NAIDOC week, I’m sharing one of my favourite books from my childhood. When I was 11 years old, I read and loved Who am I? The Diary of Mary Talence by Anita Heiss.

In primary school, I spent half of my time in the playground and the other half in the library. My friend noticed that I loved fantasy and historical fiction so for my birthday, she bought me a book I hadn’t read in this Australian historical fiction series. I read a lot but owned very few books at home so I treasured this story. It became a comfort read.

When I read Mary’s diary for the first time, I found a friend who understood me. Mary and I were the same age and we both had light brown skin. I was not Aboriginal but Australian-Filipino. Nevertheless, I was ecstatic whenever I found a book that had a character with skin like mine because it was so rare. I hungered for stories with mirrors and experiences I could relate to. Like Mary, I looked after the younger kids (my cousins) and loved to sing in the choir (but unlike Mary, I can’t hold a tune.) I could also relate to the intermittent feeling of being between cultures.

When Mary is taken from the Aboriginal Children’s Home to live with a white family, she feels torn between missing her Aboriginal family life and trying her best to assimilate. Mary’s placement in a white home is based on her lighter skin tone. She recalls seeing the kids around being placed in various orphanages and homes based on the shade of their skin.

Mary’s adoptive parents discourage her from befriending or talking to anyone who is Aboriginal. Mary is confused by this change because she still considers herself Aboriginal. This new family cares for Mary but the rejection of her cultural identity adds fuel to her identity crisis. After following Mary’s inner struggle over time, I was happy when she talked to and stuck by her older Aboriginal friend, Dot. I enjoyed the ending because it signals a shift towards social change and Mary’s own pride and acceptance of her Aboriginal identity.

I hope more kids discover this story. In high school, I learned more about the Stolen Generation from teachers and guest speakers of the Stolen Generation. I realised that small fictional details like how Mary’s original name was changed on records to dislocate Mary from her original Aboriginal family also echoed real life stories.

4 thoughts on “Friday Favourites: Who Am I? The Diary of Mary Talence by Anita Heiss”