“I will tell you the stories slowly,” she says. “So let the sounds fall gently on your ear. Listen to each sentence, each word. Let them linger. For in words there is great beauty. Patience. To tell a story takes time. To listen and hear takes time, too.” 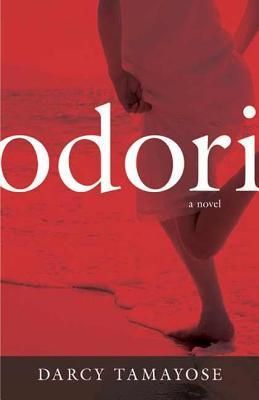 Mai falls into a coma, which takes the form of a dream world, somewhere between heaven and earth. In this place, the ghost of her great-grandmother, a storyteller from Okinawa, tells her the tales of the Ryukyuan Kingdom, the myths of the Tree and Sky gods and the history of her own family.

Odori explores the Golden Era of the Sho Dynasty, through bloody World War II Okinawa, and over parched prairies of Southern Alberta. It is the winner of the 2008 Canada-Japan Literary Award.

I was eager to pick Odori up after seeing it on a list of diverse fantasy books compiled by the editors of Paper Droids for Girls in Capes. I tend to look for stories that touch upon myth and history. Luckily, I found a former library copy through Better World Books. I have an eternal love for libraries and secondhand archives.

The writing of this novel is beautiful and poetic. In Odori, Mai is an artist and her perspective draws magical landscapes of both Canada and Japan. An artist’s touch seems to run in the family as Mai’s great grandmother introduces the reader to different points in their family’s history with a storyteller’s grace.

Emiko (Mai’s mother) and her twin sister, Miyako explore the lush mythology of the region as passed down from their grandparents in addition to the physical island of Okinawa. Unbeknownst to them, the twins were sent from their home in Canada to their grandparents in Japan for safety reasons. It’s always difficult to read about the World War II period but it’s interesting to follow how Miyako and Emiko (as sisters with very different personalities and occupations) strive to survive under the circumstances.

The pacing of the story will slowly meander for readers but the sense of kinship and storytelling throughout the family is one of the novel’s biggest strengths. Stories about migration tend to have that effect upon me as a reader. I also enjoyed how Japanese words were used in the context of family speaking to each other.

I’d recommend this book to any historical fiction reader because it’s such a rich and beautifully told perspective of that time period. Odori is very much a reflective book that follows the interior worlds of its characters and some of the reflections are golden:

She would, over the next three months, guard her journal above all else, protecting each word with her fingers…Protecting it from war. She knew the journal, with its fragile thin pages would be the foundation of her sanity. It would bring her the opportunity to compose in a time of destruction.

4 thoughts on “Odori by Darcy Tamayose”