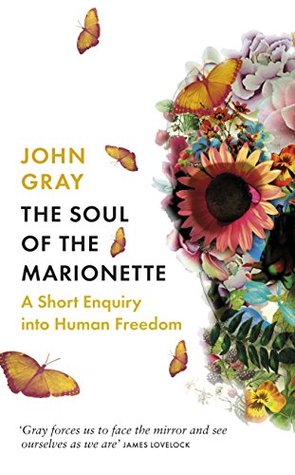 The Soul of the Marionette: A Short Enquiry into Human Freedom by John Nicholas Gray

Everyone thinks they want to be free, but what is it that they really want?

In this provocative and freewheeling book, John Gray draws together currents of thought from religion, philosophy and fantastic literature that question the meaning of human freedom.

The Soul of the Marionette explores ancient and modern Gnosticism, the mythical power of tailors’ dummies, the use of mirrors for divination and Aztec ritual sacrifice, the cyborg economy and the functions of war, the peculiar logic of conspiracies, the threat and temptation of a society based on universal surveillance and the lure of a virtual life on the Internet, among other perplexing and thought-stirring topics.

Do human beings want more choice in their lives, Gray asks – or do they, like the fairground puppets that the poet Heinrich von Kleist admired for their strange spontaneity, really dream of being free from the burden of choice altogether?

Even though I didn’t agree with all the philosophical arguments, I enjoyed learning about the different philosophies and their impact upon various historical figures, cyborgs, writers and artists. In particular, the small historical asides about the Aztec way of life and writers like Philip K. Dick caught my eye. I’ll have to read more about how Philip K. Dick’s experiences and shifting philosophies bled into his science fiction work.

I was also unfamiliar with Gnosticism but this book was a succinct and interesting introduction to this world-perspective. At times, I disagreed with Gnosticism and the fatalistic link to technology and human connections but it was a fascinating argument. I’m curious to read more about the idea of human choice and freedom from another perspective. I’d recommend this book if you enjoy a bit of history mixed with your philosophy.